At the beginning of the 1990s the McDonnell Douglas QF-4 Phantom replaced the Convair QF-106 Delta Dart as the Department of Defenses Full-Scale Aerial Target (FSAT). Tracor was awarded a contract to convert AMARC stored F-4 Phantoms at a cost of around $800,000 per machine, the company now known as BAE Systems carried out the conversion work at its facility at Mojave Airport in California.

A steady stream of F-4G, F-4E and RF-4C were regenerated from AMARC with several of them being worked on or flight tested ath the facility at any time. In October 2000 the final suitable F-4G left for Mojave, it was 69-7583 which was retired on December 19, 1990 from the 3rd Tactical Fighter Wing based at Clark AFB in the Philippines. Its departure was soon followed by the first F-4E and in the second quarter of 2008 the first RF-4C were being dispatched for conversion. It is planned that RF-4Cs will continue to be converted through 2013 and along with the surviving QF-4Gs and QF-4Es, they will be undertake the FSAT role until 2015. By November 2012 BAE Systems had completed and delivered its 300th converted QF-4.

Before the aircraft are delivered to BAE Systems at Mojave they go through the Process-Out process which takes them from storage to airworthy condition. The engines are completely rebuilt and thorough system checks are carried out in all it has been taking around 3 months to complete this work. Once completed the aircraft is fully tested by the AMARC flight test team to verify everything is working as expected. 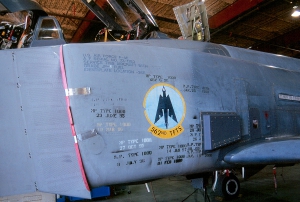 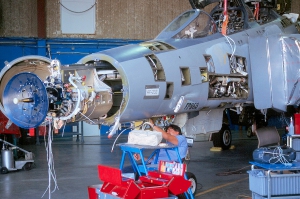 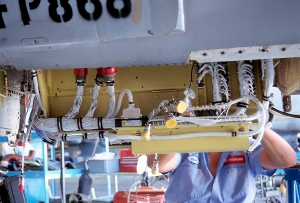 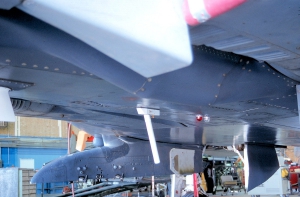 The conversions carried out include the replacement of the conventional control systems with remotely operated ones, the installation of electronic scoring systems and the painting of high visibility patches on the tail and wingtips. Each conversion takes around 4 months from the time the aircraft arrives from AMARC.

The main nerve centre of the drone system is housed in the vacant gun compartment below the front of the cockpit. Two systems provide primary and secondary functionality, the secondary system is used when a problem occurs with the primary one and only has limited capabilities. This may be reviewed in time and revised so that both systems are identical. The nose of the aircraft is also fitted with replacement electronics and lead ballast is added to make up the weight of original equipment that is removed. Although the conversion effects much of the aircraft, there are only four external signs of it to be seen. The most noticeable difference is the addition of a 'hump' on top of the fuselage. This houses transponder equipment used to locate and identify the drone.

The second most obvious change can be seen on the port side of the aircraft (see picture 3. above). A crude looking box contains the electronic scoring system that measures and records the direction, velocity and distance of missiles used against the drone on trials. The scoring system used to be housed internally in a compartment behind the cockpit, but has changed to this new location probably for easier installation and access. 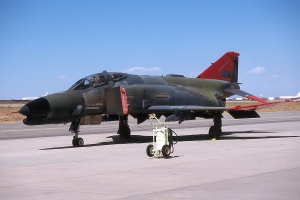 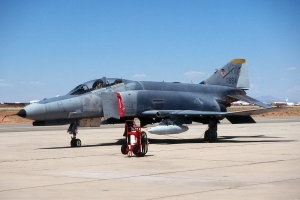 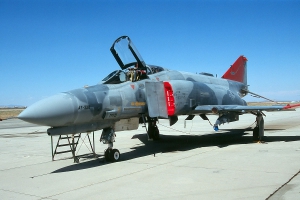 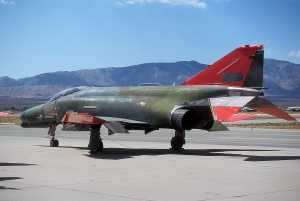 The third noticeable difference is the addition of 2 small mounds, one under each wing where the wing joins the fuselage. These mounds house the steering servos used by the guidance systems. The last difference are four sensors that are located on the tail, one on each wing and one underneath the fuselage (see picture 3. above). These sensors provide information to the scoring system on missile speed, direction and distance during trials.

One addition to the airframe during the conversion and which cannot be seen is a self-destruction installation. In the event of a communication loss between the QF-4 and the controller, or if the aircraft becomes unstable in flight, a mobile remote system will attempt to re-establish contact and fly the aircraft from a position near the drone runway allowing the operators to see the aircraft. If attempts to restore communications fail, or stable flight cannot be re-established, the aircraft self destruction mechanism will activate, destroying it and preventing it from crashing into an undesirable location.

After the conversion and before delivery to Tyndall AFB the drones go through a series of flight tests to ensure that the newly installed systems are effective and that the extensive re-wiring has not affected the reliability of the aircraft. Once finished the drone is capable of taking-off, navigating to designated locations, flying programmed flight profiles and manouevres and even carrying out landings, all controlled by remote operators many miles away. Unlike the US Navy QF-4s these drones do not carry TV broadcast capability and this makes their whole operation that much more impressive. To provide the visual information to the controllers, the remote QF-4 is followed by a manned QF-4, acting as a chase aircraft during takeoff and landing.

Due to the number of available F-4 airframes running out in the foreseeable future a replacement FSAT platform has been selected in the shape of the General Dynamics QF-16. A contract for a batch of six pre-engineering and manufacturing development QF-16s was signed with Boeing in March 2010, these will be built at Cecil Field near Jacksonville, FL. It is planned that the first production batch will be delivered in 2014 ready for the type to take over the role from the QF-4 in 2015. On November 22, 2012 the first QF-16, 85-1569, was delivered to the 53rd Weapons Evaluation Group at Tyndall AFB, FL. It is to undertake six months of testing and evaluation to ensure that its capabilities are as expected and its compatibility with the Gulf Range Drone Control System which is used to control and record the QF testing activities. From here it will move to Holloman AFB, NM. for a further four months of testing before returning to Tyndall. It is envisaged that approximately 210 F-16s will be re-generated for conversion to QF-16 drones.

My thanks go to Bob Miller at BAE Systems for the invaluable help he has given to the production of this web page.

To support the QF-4 drone program a number of leased F-4D Phantoms were flown from Mojave by BAE Systems. Each carried a civilian registration as they were not operated by the Air Force but each also retained its military serial number. During December 2003 these were retired to AMARC and turned over for reclamation where they will again support to the QF-4 program, this time as a source of spare parts. 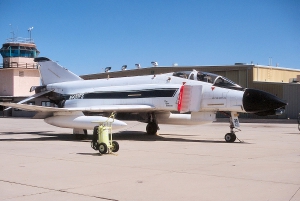 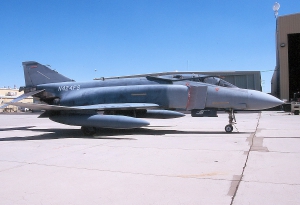 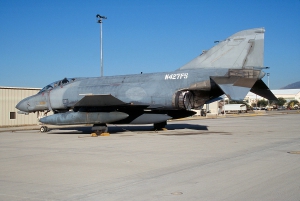 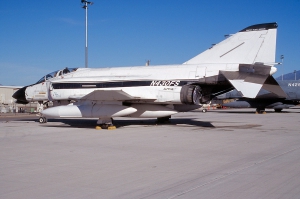