Some of the more unusual aircraft to have been stored at AMARC over the years are a sizeable group of Soviet designed MiG fighter aircraft. The exact history of these aircraft is not yet fully known but what is known is that the majority of them were imported to the USA from Poland during the mid to late eighties. Indeed, most of these 'MiGs' are actually LiMs (Licencyjny Mysliwiec licence fighters), built under licence in Poland by WSK.

What is also known is that they were used by the US DoD in the late eighties during combat trials and exercises involving various pieces of Soviet equipment including helicopters, communications and air defence systems. The Defence Test & Evaluation Support Agency (DTESA) were responsible for their operation over the White Sands missile range, NM. in September 1988. After the tests were complete the aircraft were put into storage at Kirtland AFB, Albuquerque, NM.

After a period of time they arrived at AMARC and were put into protected storage in the remote 27HOLD compound on the RIT side of the base. Some departed to the nearby Pima Air & Space Museum where they remain on display to the current day (Click here to see pictures) others departed to unknown destinations. The remaining 4 MiGs were moved to the regular Museum storage area (area 20) at the beginning of 2001. 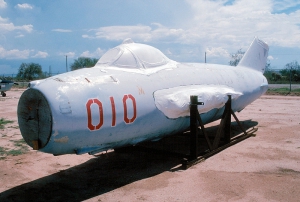 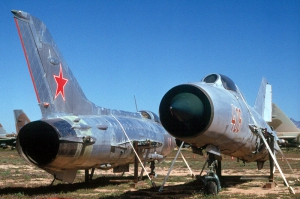 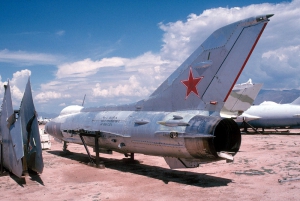 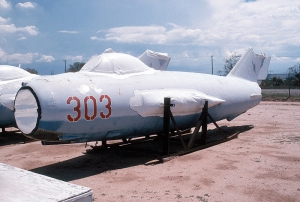 The US Air Force Museum have these aircraft on their account and they will most probably be used to trade for new aircraft or exhibits for display at the museum at Wright Patterson AFB, Ohio.

NATO codename 'Fagot or Midget'. After entering service during 1948 the MiG-15 became Russia's first successful jet fighter aircraft. It served with great success during the Korean War, and was arguably the match of the main US Air Force fighter at the time, the F-86 Sabre. By the time production ended, some 16,000 MiG-15s of all types had been built in the Soviet Union, Czechoslovakia, Poland and China. They served in almost forty countries.

The MiG-15bis was fitted with a more powerful engine and had improved avionics.

NATO codename 'Fresco'. The MiG-17 was a refined version of the MiG-15. It was very similar in shape and size to its predecessor, although it had more sharply swept wings, an afterburner, better performance and handling and was slightly longer. In total over 8,000 MiG-17's were produced, not only by the Soviet Union but also under licence by Poland, Czechoslovakia and China. The MiG-17 was in service in some countries up until the mid 1980's.

The MiG-17F was the most numerous of the type built and was a straightforward day fighter with no radar equipment.

NATO codename 'Fishbed'. The world's most widely used supersonic fighter aircraft. Entered front line Soviet service during the late 1950's. Over 11,000 were built by production lines in Czechoslovakia, the Soviet Union, and China. It had a very reliable engine, was easily maintained and had good rough field capabilities. The MiG-21 is still in use today by many air forces around the world and is still in production in China.

The MiG-21PF was a developed version of the MiG-21F. The nose cone housed a R1L 'Spin-Scan' radar system and with additional electronic updates enabled operational service in all-weather conditions.

Below is a table of all the known MiGs to have been stored at AMARC. If anyone can add any other information on these interesting aircraft I'd really like to hear from you. Please get in contact with me using the 'Contact Us' link at the bottom of this page.