In February 2010 the US Department of State announced its intention to purchase up to 110 Sikorsky S-61Ts, to support its operations in Afghanistan and other countries around the world. An agreement was signed with Sikorsky.

Carson Helicopters, a major civilian operator of the S-61, is a joint developer with Sikorsky of the S-61T Triton which is a fully modernized version of the elderly S-61 which was designed and entered service in the early 1960s. Despite its age the S-61 has an excellent reputation as a reliable workhorse with a strong and durable construction, and it is these qualities which make their re-manufacture a viable alternative. Each conversion takes six months to complete and provides a full Sagem “glass cockpit”, a modular wiring harness, engine and transmission improvements, and composite main rotor blades in order to add extra speed and another 1,200 pounds of lift capacity.

Over twenty SH-3 Sea Kings, the military version of the S-61, comprising of SH-3D, SH-3G and SH-3H have been sourced from AMARG and provided with civilian registrations prior to being overhauled. Several more have been allocated for the project but remain in AMARG, awaiting their turn.

The first converted airframe was delivered to the U.S. State Department on December 2, 2010. 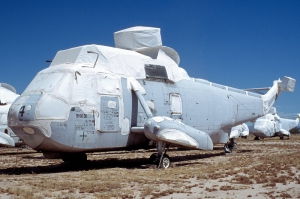 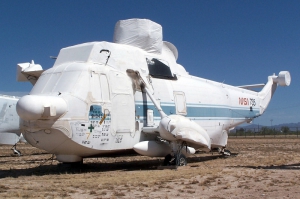 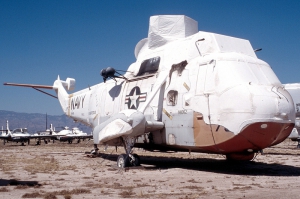 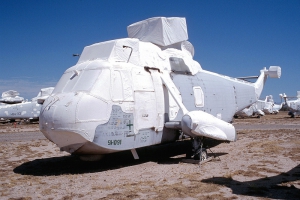 Below are Sikorsky's press releases on this project providing more information.

Sikorsky - TROY, Alabama - Sikorsky Aircraft’s Troy, Ala., facility announced today it has completed the structural modernization of its first S-61T™ airframe, which will now undergo completion at Carson Helicopters for eventual delivery to the U.S. State Department for diplomatic service in Afghanistan. Sikorsky is a subsidiary of United Technologies Corp.

The State Department signed an agreement in 2010 to purchase up to 110 modernized S-61™ aircraft that Sikorsky is refurbishing under its S-61T™ Program, managed by its aftermarket business Sikorsky Aerospace Services. The program includes the upgrade and installation of composite main rotor blades, state-of-the-art glass cockpit, modular wiring harness, and modern survivability and force protection enhancements – all of which dramatically improve aircraft capability and supportability. These enhancements result in an aircraft with improved safety, and 15 percent greater performance with a lower operating cost. The number of aircraft the State Department purchases will depend upon need and availability of government funding.

“With its rugged endurance, spaciousness and lift capabilities, the Sikorsky S-61 helicopter has proven to be a dependable, multi-mission aircraft and provides a capable solution for our customers looking for a utility aircraft with a legacy of strength and reliability. Our S-61 helicopter is the best value proposition in the industry,” said John Johnson, S-61 Program Director, Sikorsky Aerospace Services.

Sikorsky Aerospace Services launched the program in 2010 with Carson Helicopters, and so far has delivered 14 modernized S-61 aircraft to the State Department.

The Troy facility employs more than 640 people and produces SEAHAWK® airframes, and BLACK HAWK and CH148 Cyclone™ subassemblies for U.S. and foreign military customers. In 2012, the facility also began modernizing S-61 airframes for the upgrade program to take better advantage of available production capacity. Previously the airframes were all modernized at Carson Helicopters in Perkasie, Penn. The Troy facility has developed capacity to refurbish up to six aircraft in flow, with the program employing more than 100 people.

The S-61 helicopter has long been acclaimed as an industry workhorse. For more than 50 years, the aircraft have reliably and safely performed missions for U.S. and foreign allied militaries. The latest airframe first entered service as an SH-3D aircraft with the U.S. Navy in November 1966 and primarily performed antisubmarine warfare.

“Our workforce here in Troy is highly skilled and understands the importance of the work we do in support of our nation and military allies,” said facility General Manager Jason Lambert. “Completion of this first modernized airframe represents a big milestone for us. Our team is extremely proud of our ability to utilize world class lean manufacturing techniques to create capacity for this important program.”

Sikorsky Aerospace Services, a Sikorsky company, provides comprehensive support to rotary- and fixed-wing operators throughout the world. It offers its military and commercial customers a full portfolio of support services, including material distribution, maintenance, overhaul & repair, aircraft modifications and life-cycle support. Sikorsky Aircraft Corp., based in Stratford, Conn., is a world leader in helicopter design, manufacture, and service. United Technologies Corp., based in Hartford, Conn., provides a broad range of high technology products and support services to the aerospace and building systems industries.

“The S-61 helicopter is known as an industry workhorse and for decades has reliably performed missions for U.S. and foreign allied militaries. The upgraded S-61helicopter can be outfitted to meet a wide variety of requirements, and we believe it provides ‘best-in-class-value’ for a mid-size, multi-mission helicopter. In December 2010, we proudly delivered the first upgraded S-61 aircraft to the U.S. State Department for passenger and cargo transport missions,” said John Johnson, Director, S-61 Programs.

The three aircraft will transport diplomatic personnel in Iraq and Afghanistan. Building on the S-61 helicopter’s 50-year legacy of dependability, SAS initiated the S-61 Upgrade Program in early 2010. As Sikorsky’s launch customer, the DoS has entered into a five-year IQ (indefinite quantity) agreement with the option to purchase up to 110 upgraded S-61 aircraft. This IQ purchase agreement serves as the contracting vehicle for any U.S. government agency to purchase upgraded S-61 aircraft.

The upgraded S-61 helicopters will undergo a full structural refurbishment with all major dynamic components zero-timed and key upgrades provided, including new composite main rotor blades (CMRB) and a survivability suite. The customer can select additional options such as a state-of-the-art glass cockpit and crashworthy primary and auxiliary fuel systems.