The Cessna T-37B Tweet has performed the role of primary jet trainer for the United States Air Force for over four decades. Over the years most of the Air Force pilots have spent many hours flying the type before progressing to the faster T-38 Talon, larger T-1A Jayhawk or T-44 turboprop trainers later on in the undergraduate pilot training course. However, the introduction of the new turboprop engined Raytheon Beech T-6 Texan II signalled the end of the T-37 era and from 2003 examples of the type were regularly arriving at AMARC as they are replaced by T-6s fresh from the production line.

At first glance the choice of a single, turboprop-engined aircraft to replace the twin, jet-engined T-37 seems a bit strange but it was thought that the T-6 lower maintenance costs, larger fuel load and advanced avionics would provide a far better training platform for the 21st century. The biggest difference between the T-6 and the T-37 is that the instructor sits next to the student in the T-37 and behind the student in the T-6. To componsate for this the T-6 students will undergo more simulator time. The T-6 is also being introduced into the US Navy to replace their ageing T-34 Mentor aircraft and this will provide the obvious benefits of a uniform training fleet across the two services.

The T-37 made its first flight in 1955 and entered into service with the Air Force in 1956. Production of the type continued until 1975, by which time a total of 1,269 had been produced (444 T-37A, 552 T-37B). A combat version of the T-37 was also produced, designated the A-37 the first example left the production line in 1967. The A-37 was designed specifically to carry out the COIN (counter-insurgency) role in the Vietnam war and production eventaully stood at over 600 aircraft.

Many other countries have used the T-37 to train their pilots, including... 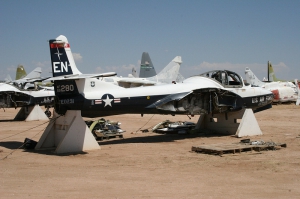 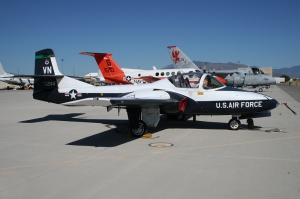 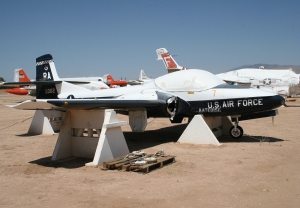 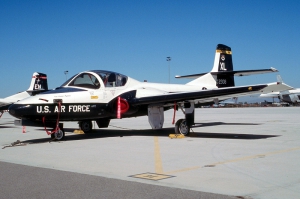 Over the more recent years there have been several plans to replace the T-37 with a more modern design. In 1982 the Fairchild T-46 Eaglet was put forward to take over the primary training role but this was cancelled by the Air Force in 1986 due to budget constraints. Two of the three T-46 prototypes produced were sent to AMARC for storage, one of these is still displayed on Celebrity Row.

Due to the popularity of this aircraft type there was always a chance that many of the T-37s arriving at AMARC would find a future home with a foreign Air Force. In 2007 Colombia, a nation that was already an experienced T-37 operator, was given a Grant Authority for the supply of 10 surplus T-37 aircraft, these were joined by another 4 in 2009. These aircraft allowed the resumption of training using the type after the existing T-37C fleet were grounded after a fatal accident involving FAC2104 on July 20th, 2006.

The Colombian T-37s supplied under the 2007 Grant Authority included;

The Colombian T-37s supplied under the 2009 Grant Authority were;

In 2008 a Grant Authority was authorized for the supply of 20 T-37 to Pakistan to add to their existing fleet, this was followed in 2010 by approval for the supply of an additional 20. These aircraft were re-generated from AMARG.