During July 2000 a large number of Sikorsky H-34 helicopters where purchased from the Bob's Air Park on South Wilmot Road and were moved to their new home 2 miles away (See Bob's departure list). These aircraft had been stored in long rows at Bob's for many years and before that they were resident in the Allied yard just down the road in East Drexel Road. Over 120 Army H-34 and US Navy variants were purchased by Jack's Government Surplus with a view to sell them on to private collectors, organisations, museums and even film companies.

Jack's Government Surplus has a small premises split over 2 locations. The storage yard was seperate from the main office and contains the majority of the helicopters, with only one or two examples in the yard attached to the office. 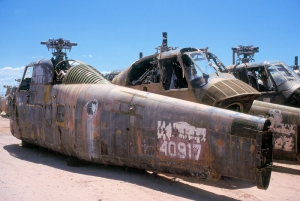 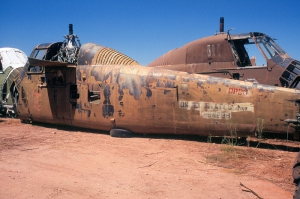 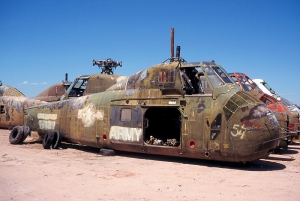 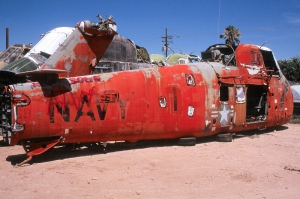 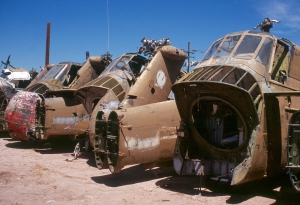 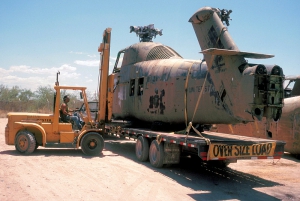 Jack's Government Surplus is located on E.Cindrich Road, which is a portion of a road which leads between the Pima Air & Space Museum (the road exits onto Valencia just opposite the West side of the museum) and the large powerstation which sits on South Alvernon Way. This road zig-zags through many car scrapyards and past the road leading to DMI Aviation. If you travel from the Pima Air & Space Museum end, the storage yard can be found on the left about half a mile past Jack's main office which is located on the right hand side of the road.

Many of the H-34's were in poor condition after being in storage for such a long time, many no longer had visible markings making it extremely difficult to identity them. Some examples in the listings on this web site could only be identified using the faded MASDC inventory numbers or manufacturers id plates. To add to the problems the helicopters were closley packed into the yard making it difficult to see what was in there even if you are given permission to have a look around. From the outside the yard, at ground level, very few helicopters could be seen.

Over the years only a few of the helicopters appear to have been sold, including 2 delivered to a paint ball adventure centre called Command Post at Maricopa, Phoenix, AZ. Pictures of these aircraft can be seen on their web site., they were ....

In December 2010 the whole of Jack's helicopter stock was advertised as being for sale and any that were not sold were to be scrapped. An advert on the Barnstormers web site read ...

SIKORSKY • AVAILABLE FOR SALE OR FOR PART OUT • 114 (that's not a misprint) Sikorsky H-34 S-58 airframes full of parts. Parts, airframes or entire lot. No Engines, records on most. LOCATED in TUCSON. Lost lease on lot. All must go by February 28, 2011. Will assist in loading. Custom Goose neck trailer available for sale that will haul 2 at once behind a heavy pickup. 9 more and more parts in Everett WA. 1 of the 9 in restricted and is close to flying. 1 complete but needs airframe repair. Scrap man offered 1000 each but I hate to see them scrapped •

It is understood that by September 2011 the helicopters were disposed of with most being shredded on site, although a few with some noteworthy service history were saved including UH-34Ds 148115 and 150255. 150255 went to the Wings and Rotors Museum, French Valley airport, Murrieta, CA. where it has been restored.

Google Earth does show six H-34 still stored in the yard. They are sitting at the very back behind the many Government surplus vehicles that now take the helicopters place. The serials of these remaining (if indeed they still remain) is not known.