A total of 27 C-9Bs were delivered to the US Navy. The earliest 12 were produced in the early 1980s by converting civil DC-9 airliners, the other 15 were produced on the McDonnell Douglas production line during the 1970s and 1980s. The major difference between the airliner and military versions of the DC-9 is the large cargo door which was added to the port side of the aircraft and other necessary cargo-handling features which allows for the conversion to either a full or partial cargo configuration.

The C-9B has proved to be a capable and flexible asset with the ability to change interior configurations to specifically meet cargo or passenger airlift mission requirements. During 2002 alone, the US Navy C-9B fleet accumulated more than 25,600 flight hours, transporting more than 250,000 personnel and 7 million pounds of cargo to locations throughout the world.

In common with the C-9A Nightingale, the Air Force Aeromedical Evacuation version of this aircraft, age, increased support requirements and noise regulations has prompted their replacement with a newer type. The upgrade of the C-9B fleet was initially considered but even with the replacement of engines and avionics the fleet would still consist of 30 year old airframes with considerably less performance than some of the more modern aircraft types now available. 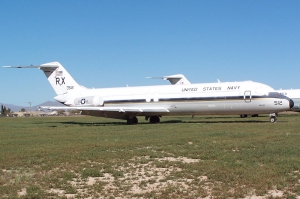 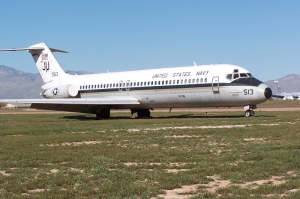 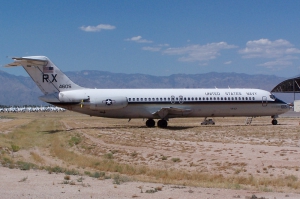 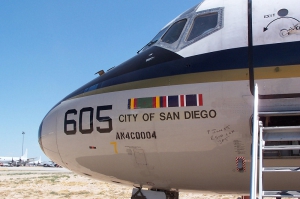 The aircraft chosen to replace the C-9B, the Boeing C-40 Clipper which is a military version of the Boeing 737-700C airliner, has provided the US Navy with a faster aircraft with an extended flight capability, which meets the strict international noise regulations. The US Navy is very keen on replacing their older aircraft types and the C-9 is just one of the many US Navy types arriving at AMARC over the last few years.

Fleet Logistics Support Squadron FIFTY SEVEN (VR-57) have recently begun their transition to the new Boeing C-40 Clipper and as a result one of their C-9s (164605) arrived at AMARC on June 9, 2005 for long term storage. It joins three other C-9Bs which have been retired to the Center since the end of 2001.

The C-40 has had a slow and steady introduction into service, with Fleet Logistics Support Squadron FIFTY NINE (VR-59) being the first squadron to convert to the type at the end of 2001. The Naval Reserve believes that the C-9Bs should be replaced by C-40s on a one-for-one basis but studies are currently underway to assess what the actual airlift requirements are and the final aircraft purchases will be based on the results of these studies.