It was inevitable that owing to the rapid retirement of so many Lockheed C-141 Starlifters to AMARC it would not be long before the large scale scrapping of the type began. With no airframe life remaining there is no chance of them returning to the USAF active inventory and with so relatively few C-141 left operational there is no requirement for a large number of reclamation aircraft at AMARC.

Due to the size of the C-141 initial scrapping is being carried out in situ using the same method that has been used on the scrapping over the years of the mighty B-52 Stratofortress. A crane with a slipper gear raises a 13,500lb guillitine blade to a height of approx 60 foot before dropping it on the predetermined cut point, severing the aircraft with ease. This technique appears simplistic but proves extremely effective. Some of the C-141s were towed out on their own landing gear behind the tractor units seen regularly travelling between AMARC and HVF West's premises. Others were cut into smaller, more manageable pieces using a Caterpillar 330B Excavator fitted with grab attachment and hauled off in dump trucks. 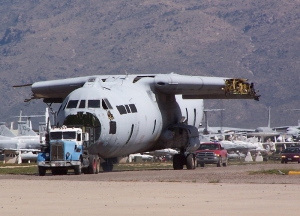 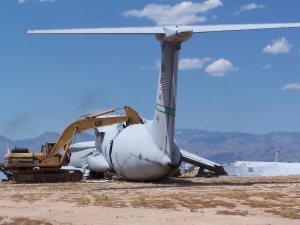 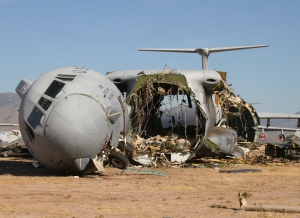 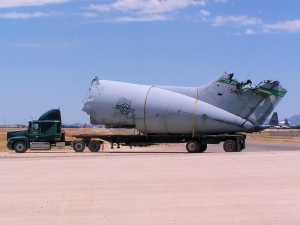 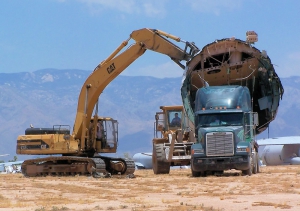 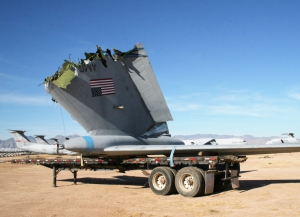 To make their removal more manageable three or four cuts were made to each aircraft , one to each wing, one to the tail section and sometimes one cutting off the nose section. HVF West, a local metal processing company, were responsible for the removal and processing of the remains at their facility located a few miles from the AMARC main gate. Here the aircraft sections were ground down into very small metal fragments which will be ready for smelting down into ingots for recycling. HVF West have been heavily involved with AMARC for a number of years, most notably with the disposal of the B-52 bombers cut up as part of the START II agreement.

The C-141 cutting work was started during July 2003 and initally targeted the older arrivals in the reclamation area which had been languishing since the mid 1990s. By mid August areas 23 and 24 had been cleared of the type and many examples being stored in area 3 had also been cleared.

It was hoped that a few examples would find new homes at museums or acting as gate guards although their size would have made this a difficult and costly option. In the end only one escaped scrapping when C-141C 65-0248 flew out on June 3, 2005 bound for the museum at Warner-Robins AFB.

The last C-141 Starlifter to leave AMARG was C-141B 66-0160 which had been used to Accident & Battle Damage Reapair (ABDR) training over in the remote area 28 on the very east side of the base. It is a shame that so few C-141 Starlifters now survive after performing so well for the Air Force for over the 30 years.