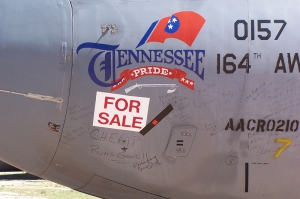 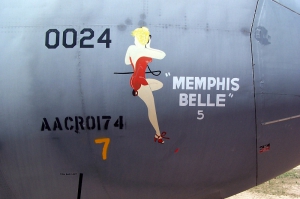 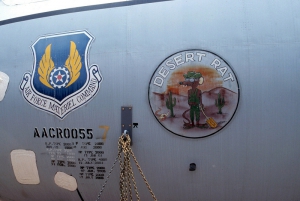 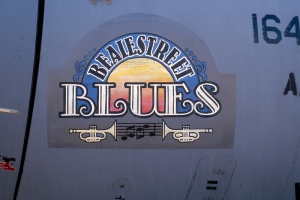 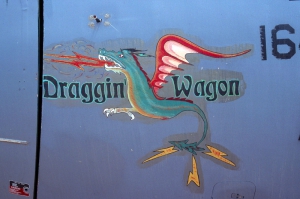 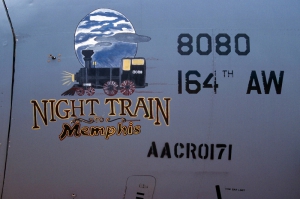 There is a long tradition in the U.S. Air Force of aircraft carrying colorful nose-art on their aircraft dating back to before WWII but it was during the war that the nose art phenomenon really gained popularity. During these grim years of conflict the painting of nose-art and the naming of aircraft proved invaluable in raising the moral of the servicemen and instilling pride in the equipment they maintained and flew, and the units with which they served. Questions were asked about the colorful artwork diminishing the effectiveness of camouflage but this did not reduce the enthusiasm of its use. Common subjects depicted included cartoon characters and pin-up girls which were unsuprisingly popular at the time with the young servicemen stationed many thousands of miles from home.

Many combat aircraft continued to display nose art through the Korean War but following this conflict the Air Force began to restrict its use and examples of it became the exception rather than the rule. It remained more popular with some Air National Guard units but many other Air Force and National Guard units resorted to applying their own color schemes and flashes to the tails and fuselages of their aircraft. There was a renaissance of the tradition in the early 1970s with WWII type designs being applied in a show of pride for the Air Force's heritage. The nose art resurgence gained momentum during Operations Desert Storm, Enduring Freedom and Iraqi Freedom alhough by 1998 political correctness was beginning to restrict the use of the traditional pin-up girl and the more 'edgy' subject matter.

Currently the adoption of nose-art has been excepted by the Air Force but its application and content are controlled by published guidelines which dictate the size, position, quality, content and use. An extract from the Air Mobility Command guidelines can be seen below;

"Nose art is authorized on one aircraft per flying squadron, plus the wing pride aircraft. Additionally, one aircraft per wing may have the “Let’s Roll” graphic applied as nose art; it may be on one of the above aircraft, or in addition to the above aircraft. Nose art is not permitted on any aircraft flying missions where local populations may consider it sensitive or offensive. Art will reflect a theme of civic and community pride, be distinctive, symbolic, and designed and maintained to the highest quality standards. Positioning of nose art is at the discretion of the wing commander; however, it must be forward of the wing leading edge and not interfere with any mandatory markings. Nose art should be approximately two-thirds the size of the fuselage national star insignia, not to exceed three feet in diameter. All nose art applied to wing aircraft will be of standard size and location. Nose art and tail flash designs must be approved prior to installation."