Two interesting AMARC arrivals in April 2006 were vintage North American F-86F Sabres 55-5026 and 55-5035. They arrived in a dismantled state for storage on behalf of the United States Air Force Museum (USAFM) at Wright Patterson AFB, OH. 55-5035 is little more than a tail section but 55-5026 is reasonably whole.

These F-86F were originally supplied to the Republic of China Air Force (RoCAF) under MAP (Military Assistance Program) and evidence of this can be seen on the fuselage of 55-5026 where chinese writing is present. After retirement from the RoCAF these F-86 and many others were returned to the USA for conversion to QF-86 pilotless drones at Naval Air Weapons Station China Lake. When the QF-86 drone program had finished a number of unconverted F-86s remained stored at China Lake, over time many of these found there way into museums and private hands. 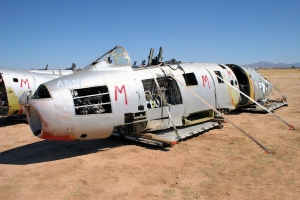 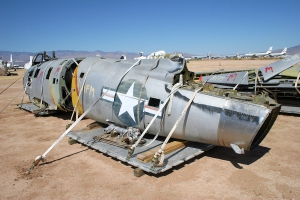 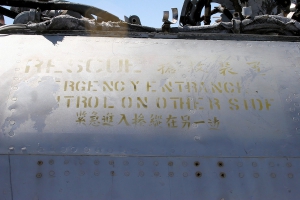 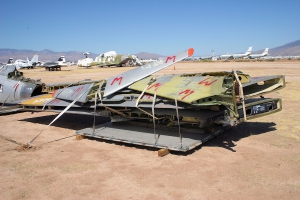 It appears that 55-5026 left China Lake in the late 1990s to the Budd McGhee Air Park collection in nearby Inyokern. The USAFM acquired the F-86 and it was moved to Wright Patterson AFB, from here it was delivered to AMARC. 55-5035 left China Lake and eventually ended up at the Southern Museum of Flight, Birmingham, AL. The main fuselage was restored to display condition using the tail from another F-86F. Its original tail is what is now at AMARG.

These aircraft will most probably be used for trade to obtain additional display aircraft or material for the Museum.

The North American F-86 Sabre was a highly successful fighter aircraft and served in large numbers during the Korean War. Many foreign air forces flew the type, supplied new from the factory and also through MAP. MASDC (as AMARC/AMARG used to be known) saw several hundred of the type arrive in the 1960s from Air National Guard, Tactical Air Command and also from various foreign customers. The vast majority were scrapped by the first years of the 1970s although a few were still stored up until the middle of the decade.