During 2010 the 325th Fighter Wing based at Tyndall AFB, FL.lost its two squadron of F-15 Eagles as part of the Air Force's divestiture of ~250 legacy fighter aircraft in FY 2010. As a result of these losses and the loss of the 325th's 95th Fighter Squadron which was inactivated during September 2010, the 173rd Fighter Wing became the sole Air Force F-15 training unit.The re-allocation of the 325th's aircraft resulted in a number of the 173rd F-15C/Ds arriving at AMARG for retirement during the Tyndall F-15 drawdown.

The 173rd F-15s can be easily identified by the impressive Bald Eagle artwork carried on their tails which has a bolder design to that which is carried by the 142nd Fighter Wing based at Portland IAP, OR.

The last of Oregon Air National Guard's F-15A Eagles was retired to AMARG on September 16, 2009. The retirement of 77-0098, from the 142nd Fighter Wing, brought to an end of 15 years F-15A/B service with the command. The 142nd converted to the F-15A/B aircraft from the F-4 Phantom between 1989 and 1990, with most of those aircraft coming from the 318th Fighter Interceptor Group at McChord AFB, WA., which was being inactivated.

The first of the 142nd's replacement F-15C/D aircraft came from the 18th Wing based at Kadena Air Base, Japan. These were followed by more from Kadena and from other Air Force units. 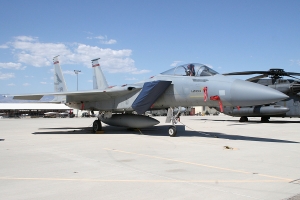 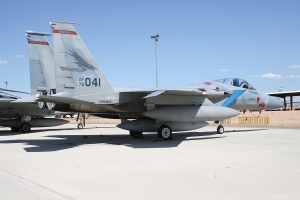 One 123rd F-15A that didn't turn up at AMARG was 73-0089, the oldest and longest serving F-15 in the Air Force inventory. On April 29, 2010 this aircraft was disassembled and trucked by road the short distance from Portland to McMinville, OR., where it is now on display at the Evergreen Aviation and Space Museum.

As well as being the primary air defense capability for all of the Pacific Northwest and Western Canada the F-15A/B of the 142nd have also taken part in exercises and operations around the World.