The origin of VS-21 can be traced back to 26 March 1945 when Carrier Escort Air Group FOUR ONE (CVEG-41) was established at NAS San Point, Washington. Comprised of Fighter Squadron 41 (VF-41) and Torpedo Squadron 41 (VT-41), CVEG-41 employed the Ryan FR-1 Fireball and TBM-3E Avenger, respectively. On 15 November 1946, both VF-41 and VT-41 established the new Carrier Escort Air Group ONE (CVEG-1) and were re-designated as Fighter Squadron 1 Escort (VF-1E) and Attack Squadron 1 Escort (VA-1E). Together, they formed the first of three air groups specifically established to conduct "hunter-killer" ASW operations.
On 12 December 1946, while assigned to CVEG-1, the tail code "BS" (callsign Beef Steak) was used by VS-21 and remains its callsign today.

In the fall of 1948, CVEG-1 was re-designated Fleet Composite Squadron TWO ONE (VC-21). As a part of this re- designation, VF-1E and VA-1E were decommissioned, VC-21 was moved to NAS San Diego and the TBM-3W (hunter) and TBM-3S (Killer) aircraft became the hunter-killer force of the U.S. Navy. VC-21 was the first of seven ASW fleet composite squadrons to enter the fleet. The TBM-3S was outfitted with eight sonobuoys and was capable of attacking with depth bombs, rockets and ASW torpedoes; while the TBM-3W was equipped with a rotating search radar antenna. 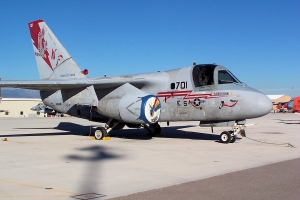 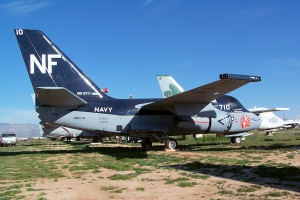 On 23 April 1950, VC-21 was designated VS-21 and on Independence Day 1950 became the first carrier-based squadron to depart the United States in response to the Korean War. During this conflict, the squadron was responsible for the evacuation of 1st Marine Division wounded from Kotori airstrip near the Chosin Reservoir.

Upon their return to NAS North Island, San Diego as recipients of the 1950 Commander Naval Air Force, U.S. Pacific Fleet VC Safety Award, the squadron transitioned to the Grumman AF-2 Guardian. The largest single-engine aircraft to ever serve in the U.S. Navy, the Guardian was built in two versions – the radar-equipped AF-2W (hunter) and heavily armed AF -2S (killer). Flying the AF-2 series, VS-21 made multiple deployments and spearheaded the 1954 ASW carrier (CVS) concept on Essex-class ships.

In December 1954, the squadron was chosen as the first command to transition to the S2F-1 (S-2D) Tracker. The twin- engine aircraft combined both hunter and killer roles within a single airframe for the first time.

In 1955, the red lightning bolt was first displayed on the engine cowling and later the tail, establishing a tradition that lasts to this day. That next year, VS-21 became the first VS squadron to win the Pacific Fleet Battle Efficiency "E" award.

The squadron was divided in April 1960 with the establishment of VS-29. The two VS squadrons, together with HS-6 formed Carrier Anti-Submarine Group FIVE THREE (CVSG-53) and embarked on that Carrier Group’s inaugural Western Pacific deployment embarked in USS KEARSARGE (CVS-33). As part of that Carrier Group, VS-21 participated in the recovery of LCDR Wally Schirra, pilot of Mercury capsule Sigma 7, and MAJ Gordon Cooper, pilot of Mercury capsule Faith 7. During their third Western Pacific cruise together, KEARSARGE and CVSG-53 deployed to the South China Sea in response to the Gulf of Tonkin crisis to provide maritime surveillance as well as search and rescue services off the coast of Vietnam.

In 1965, VS-21 accepted the advanced S-2E and became the first VS squadron to operationally employ the AGM-12 Bullpup air-to-surface guided missile.

Seventeen years after successfully testing the CVS concept, VS-21 joined the USS SARATOGA in 1971 to validate the multi- purpose CV Carrier concept that incorporated fixed-wing ASW assets into attack carrier airwings. This carrier/airwing experiment proved successful and has stood the test of time to present day.

In 1974, VS-21 was chosen as the first command to introduce the Lockheed S-3A Viking to the fleet. The twin turbofan powered Viking combined excellent flight characteristics with high endurance to counter the increasingly lethal Soviet nuclear submarine threat. Embarked in USS JOHN F. KENNEDY (CV-67) as a part of CVW-1, VS-21 deployed to the Mediterranean Sea in February 1975 as the first squadron to deploy with the S-3A Viking. That same year, the Redtails won the Battle "E", the CNO Safety Award and the Captain Arnold J. Isbell Trophy for ASW excellence.

In April 1991, VS-21 was selected by Commander Naval Air Force, U.S. Pacific Fleet as the first west coast squadron to transition to the Lockheed S-3B. The most advanced ASW and sea control platform in history, the S-3B incorporates an extensive weapons system improvement program that added an advanced imaging capable ISAR RADAR, Electronic Counter Measures, vastly improved anti-submarine technologies, and AGM-84D Harpoon air-to-surface missile employment. Additionally, the S-3B modification provided the aircraft with inflight refueling capability. As the only carrier-based refueling aircraft, the S-3B is the cornerstone of all carrier operations and strike capabilities within the airwing.

In August 1991, VS-21 embarked in USS INDEPENDENCE (CV-62) and joined Carrier Air Wing FIVE as the only permanently forward deployed VS squadron. In keeping with the S-3B's multi-mission capability, VS-21 was redesignated from Anti- Submarine to Sea Control Squadron TWO ONE in 1993.

VS-21’s distinguished history is highlighted by over 30 deployments in 18 carriers involved in supporting national interests in every theater of operation, and spanning over 75% of the earth’s surface. A chronicle of VS-21’s storied past includes participation in the Korean War, Vietnam War, Operations PRAYING MANTIS, EARNEST WILL, VIGILANT SENTINEL, SOUTHERN WATCH and support of Taiwan’s first ever democratic presidential elections. Most recently, in 1997 VS-21 deployed to the Arabian Gulf on one week’s notice and is credited with checking Iraqi aggression in the region. They have been awarded eight Battle Efficiency "E" awards (to date) and numerous other campaign and unit level awards.

VS-21 has been a participant in RIMPAC exercises since 1971 and continues to enthusiastically advance cooperative efforts with our host country and regional allies. VS-21 is currently embarked in USS KITTYHAWK and is based at NAF Atsugi, Japan.