Fleet Logistics Support Squadron FIFTY SEVEN (VR-57) have recently started their transition from the aging McDonnell Douglas C-9B Skytrain II to the new Boeing C-40 Clipper, the chosen replacement for the C-9B. May 26, 2005 saw the last departure from NAS North Island of a VR-57 C-9B after serving the squadron for more than 25 years.

VR-57 started flying the C-9B in 1978 and since then have flown more than 140,000 hours all of which have been class A mishap free. VR-57 C-9B's have flown all over the world and have had passengers ranging from Dolphins to distinguished visitors and also flew blood and plasma to New York the day after September 11th, 2001.

VR-57 is the first West Coast squadron to convert to the C-40. The squadron will start operating the new type by August 2005, initially flying aircraft which are sourced from VR-59 and VR-58. By October 2005 they should receive their own aircraft as well as brand new hangarage at NAS North Island in which to house them. 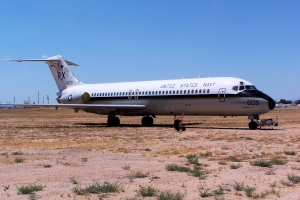 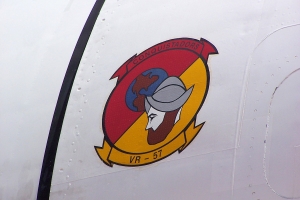 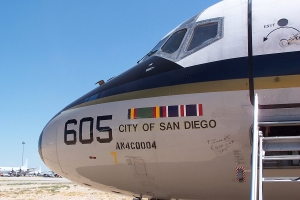 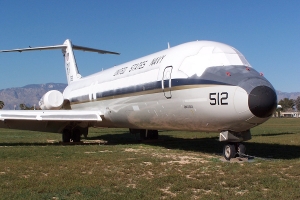 Fleet Logistics Support Squadron FIFTY SEVEN (VR-57) is a Naval Reserve Force squadron which was established at NAS North Island, California in November 1977 and comprises of both active duty and reserve personnel. Fleet Logistics Support Squadrons and their aircraft serve as the Navy’s own airline in transporting personnel, high priority spare parts, cargo and mail, into and out of every theater of operations worldwide.

VR-57 is one of eight jet logistics squadrons in the United States Navy. The Commanding Officer of VR-57 reports directly to the Commander, Fleet Logistics Support Wing based at Naval Air Station Dallas, Texas.

Between April 1978 and May 2005 the Conquistadors operated four McDonnell Douglas C-9B Skytrain II. These aircraft provided a most capable and reliable platform on which the squadron provided around-the-clock, world-wide logistics support for the Navy and Marine Corps regular and reserve forces. Each aircraft was normally manned with a crew of six, and was capable of carrying 100 passengers or 27,000 pounds of cargo or a combination of both.

In December 1990 VR-57 was mobilized to support Operation Desert Shield operations. Operating from Sembach Air Base in Germany over a period of 4 months, VR-57 carried troops, supplies and munitions throughout Europe, the Mediterranean and the Arabian Gulf. VR-57 also carried out operations in support of Operation Desert Storm.

Over the years VR-57 has achieved an impressive record of an almost 100% mission completion rate.