In 1991 the Douglas EA-3B, an electronic reconnaissance version of Douglas A-3 Skywarrior attack aircraft and a veteran of over 40 years fleet service was retired from the US Navy. The last example (146448) from VQ-2 arrived at AMARC on the 1st October 1991. The carrier based electronic reconnaissance and countermeasures capability which the EA-3B provided was replaced by a signal intelligence modified S-3 Viking, the ES-3A Shadow. Sixteen of these aircraft were produced by the conversion of existing S-3A aircraft, the first being introduced into service in 1991 and the last being delivered in 1993.

The ES-3A was packed with electronic sensors and processing equipment, the most important being an advanced avionics suite based on the Aries II system of the land-based EP-3E Orion. Externally the addition of 60 antenna gave the ES-3A a very distinctive appearance to the other S-3 Viking variants. It's primary mission was to provide real-time signals intelligence (SIGINT) to tactical commanders for air, surface and ground operations, although it retained the S-3A's airborne refueling capability to enable it to carry out a secondary, airborne tanking role.

Two squadrons were established to operate the ES-3A, VQ-5, initially based at NAS Agana, Guam but moving to NAS North Island, CA. in August 1994, and VQ-6 operating out of NAS Cecil Field, Jacksonville, FL. Each squadron was equipped with eight ES-3A and these were divided up into 4 detachments of two aircraft each. Two aircraft would be deployed to each airwing at a time and typically would build up more flight time than any other aircraft on the carrier flight deck. 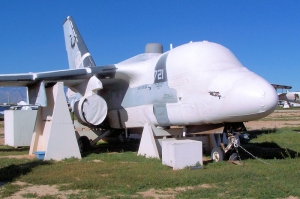 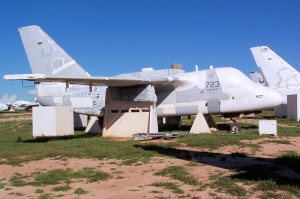 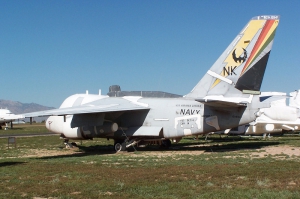 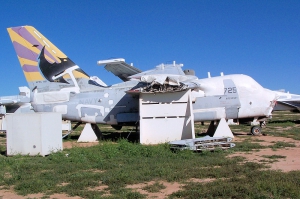 The ES-3A Shadow fleet was decommissioned by 30 September 1999. The decision was mainly based on the cost of upgrading the fleet's communication equipment to allow interconnectivity to the other elements of the Navy's SIGINT platform. It was decided that the ES-3A mission would in future be carried out by the land based Lockheed EP-3E Aries II. The ES-3A squadrons were disestablished by the end of that year with their aircraft being retired to AMARC, the last (159752) arriving on the August 10, 1999. At first the ES-3A's were kept in Type 1000 storage, ready to be regenerated and returned to service as war reserve. During 2003 they were moved to the reclamation area and started to yield spare parts to keep the active S-3 Viking fleet in the air.

VQ-5 were commissioned on August 15, 1991 at NAS Agana in Guam. They were initially equipped with two S-3A Vikings to provide the squadron with pilot and crew training while waiting for the ES-3A, the first of which was delivered on May 8, 1992. VQ-5 was divided into four detachments, three based at NAS North Island, CA. and the fourth (Detachment 5) at NAF Misawa, Japan. The first squadron deployment was aboard USS Independence in November 1993.

Between August 1994 and January 1995, VQ-5 moved to NAS North Island, CA. as NAF Agana was prepared for closure. This yielded benefits to the squadron as it would be located nearer to the carrier air wings on the West Coast and as a result would ease their work-up cycles before detachments. Detachment 5 was established on 1 October 1994 as part of Carrier Air Wing 5 based at NAF Misawa, Japan. This unit was formed to permanently support the carrier permanently based in Japan, this was the USS Independence up until 1997 when the USS Kitty Hawk replaced it.

VQ-5 aircraft were involved with US Navy operations around the world including operations off Korea in 1994 and Taiwan in March 1996, and Operation Southern Watch (the enforcement of the no-fly zone over southern Iraq). VQ-5's last deployment was aboard the USS Carl Vinson in December 1998 in support of Operation Desert Fox strikes against Iraq. The return of the unit from this deployment marked the end of ES-3A operations with the US Navy. VQ-5 were disestablished on June 4, 1999 and their ES-3A's were retired to AMARC by mid June 1999.

VQ-6 were commissioned on August 26, 1999 at NAS Cecil Field, Jacksonville, FL. As with VQ-5, the eight aircraft in VQ-6's fleet were split into four detachments each with two aircraft and they provided support to the five Atlantic Fleet airwings. In 1998, the squadron moved to NAS Jacksonville as NAS Cecil Field prepared for closure.

VQ-6 proved to be valuable NATO resources during the conflict in Bosnia and supported operations from the carriers USS Theodore Roosevelt and USS America in August and September 1995. During their deployments to the Arabian Gulf missions were flown in support of Operation Southern Watch, enforcing the no-fly zone over southern Iraq. VQ-6's last deployment was onboard USS Enterprise (CVN-65) providing signals intelligence (SIGINT) and tanking support for Operation Desert Fox, the December 1998 air strikes against Iraq.